Roborock has announced an improved version of its wet and dry stick vacuum: the Roborock Dyad Pro. The stick vacuum cleaner is equipped with a system with which it can clean itself.

Just like its predecessor, the renewed Roborock Dyad Pro is suitable for vacuuming wet and dry dirt. The stick vacuum cleaner is equipped with two soft roller brushes that rotate in opposite directions, so that no dirt remains on the floor.

Roborock promises a suction power of 17,000 Pa (17 kPa). An enormous suction power: at Vacuumtester.com we have not yet tested a cordless stick vacuum cleaner with such a high suction power.

With the renewed floor brush you can now vacuum even better along edges and corners: on both sides there is only 1 millimeter distance.

One of the most striking points of the new Roborock Dyad Pro is the self-cleaning and drying system. When you place the stick vacuum in the charging station, you can clean the roller brushes. We also recently saw this technique during the Philips AquaTrio 9000 Series review.

However, you can also let the roller brushes of the Roborock Dyad Pro dry. You don’t have to remove the roller brushes from the floor brush: thanks to warm air, they are dried well and unpleasant odors and mold don’t stand a chance.

The Roborock Dyad Pro is equipped with an LCD screen. You can view the battery life, among other things, on the display. Thanks to a smart sensor you can see exactly where dirt is on the floor, so you know in which direction to vacuum. And the Auto Dispenser automatically adds the necessary amount of detergent, depending on how dirty the floor is.

Thanks to a smart sensor you can see exactly where dirt is on the floor, so you know in which direction to vacuum

The Dyad Pro can be linked with an app. Linking a stick vacuum cleaner to an app is nothing new: we also encountered this in the Tineco Pure One S11 review. In the app you can view error messages or view the maintenance of the vacuum cleaner.

The Roborock Dyad weighs 4.8 kilograms. The water reservoir has a capacity of 900 milliliters. The dust container is exactly the same size as that of a Dyson V15 Detect: 770 milliliters. The battery life is 43 minutes.

The release date of the Roborock Dyad Pro is later this month. It will initially only be available in the United States. Three months later, the release of the new Roborock S8 series also takes place.

The Roborock Dyad Pro has a price tag of $449.99. This makes it cheaper than its predecessor, the original Dyad. 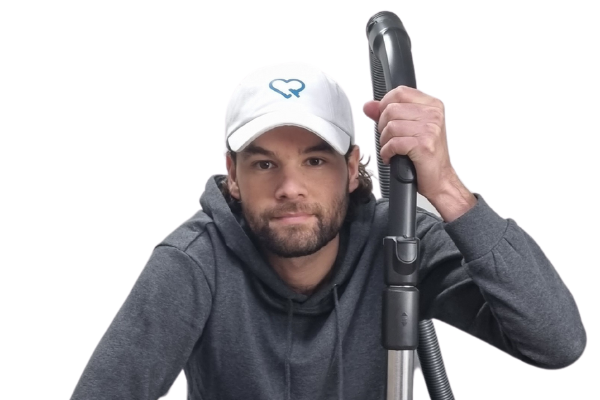 Hi Rob here! I am the founder of Vacuumtester.com. We conduct independent research into vacuum cleaners. We buy every vacuum cleaner we test ourselves and examine it using our own research methodology.